Do You Need to Smoke Cigars to be a Professional Gambler? 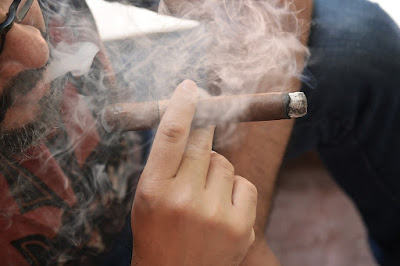 Both my parents smoked.

One loved a pint and Castella while the other a vodka and cigarette.

I told my mum many times that it just wasn't lady like to smoke a cigar.

However, I would love to meet a woman who could afford to pay £500 for a box of 20 cigars. For her personal use. A good, heavy smoker.

I get the feeling she'd have a story to tell.

I think they must be a rare breed.

My Dad loved a cigar. He always smoked Castellas. A box of five back in the day cost £5. So that's a quid a piece. I have no idea what they cost these days. If he was feeling flush he would upgrade to a King Edward. I wish I had bought Dad a box of Cuban cigars. It might have taken me a year to save the money to buy such exotic refinery.

I know on the box of each cigar it says: ''Smoking kills'' but I know my father would have killed for a good cigar.

I'm pretty sure smoking did him no favours and may have cut his life short. A sad loss at the age of 62.

If anyone deserved a long life it was this good, kind man who did his best for all.

It's a strange thing that all those years Dad smoked his cigars I couldn't smell that distinctive aroma.

However, years later, if I got a waft of cigar smoke down the street or at the races it would catch my senses and memories of my Dad.

To be fair, I don't think there are many people who can afford to smoke these days let alone a cigar with a touch of class.

I've never smoked but for some reason I have this feeling if not need to buy a sample of pricey cigars and smoke them while attending Great Yarmouth racecourse. This seaside racecourse fills my heart with joy with the fondest memories and feeling of family, hope and love which I never really thought much about until the passing of my Dad.

I actually bought a couple of cigars which are still awaiting the day and this has been several years. I'm sure they must have dried to a crisp and if lit would burn like a fuse rather than a pleasant smoke.

There has always been an association with professional gamblers and smoking cigars. I guess because you need a fair wedge to even buy a cigar. Something tells me that someone who buys a cigar that costs £25 a time isn't going to Honest Joe Turf Accountant and bet five pound each-way on number ten.

Dad would be at the races, smoking his cigar, and betting. To be fair he was betting ten, twenty or a little more cash if he was on a winning day.

I'm going on our merry pilgrimage to the Eastern Festival this September at Great Yarmouth races. We go as a family to remember those who are sadly no longer here. I really need to buy my box of Cuban cigars and walk around the racecourse and light a cigar and say: ''Thank you, Dad.''

For all those good times I took for granted.

I just wish we could go to the races once more and I say: ''I've got you a little present.''

And offer him the best Cuban cigar that money can buy.

For all those people who saw my Dad smoking his cigars at the racecourse he wasn't a professional gambler but the kindest most decent man you ever could meet who loved a cigar.

Photo: Pixabay free for commercial use and no attribution but given