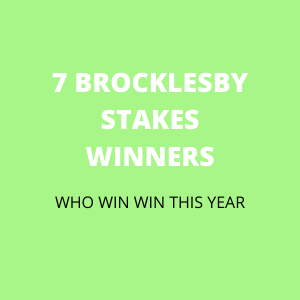 The Brocklesby Stakes heralds the start of the Flat turf season.

Are you ready for the Brocklesby Stakes 2021?

Take a look at these past winners.

This race has a long history dating back to 1849 as an all-age 12-furlong race at Carholme racecourse, Lincolnshire, which closed in 1964.

The Brocklesby Stakes has been dedicated to two-year-old racing over five furlongs since 1875.

Historically, the best horse to win the Brocklesby Stakes was Donovan (1888) who went on to win the Derby and St Leger (1889).

One horse that readers may remember fondly is Provideo, trained by Bill O'Gorman, who was a class handler of speedy thoroughbreds. A brown son of Godswalk, he won the Brocklesby Stakes by four lengths in 1984. This exceptionally durable colt set a 20th-century record for a British-trained two-year-old winning 16 of his 24 races. O'Gorman placed this horse to perfection considering Timeform rated him 20lbs below the best juveniles racing that year. However, Provideo still secured victories in two Listed races. In addition, he was crowned British Horse of the Year (1984) & Timeform Horse of the Year (1984).

For many punters, the idea of betting on a debutante in a field of horses making their racecourse bow is a minefield. To be fair, I'm not keen wagering two-year-olds on their first day at school. It can be a tricky time. The combination of inexperienced horses, a draw bias in a large field and possibly testing ground doesn't add to confidence. However, only a handful of winners have been double-figure odds.

The Brocklesby Stakes is a significant race. If you need proof, there have been a number of talented juveniles winning this contest for horse trainers large and small.

Would I bet on a horse in this race?

Denham Green won the Brocklesby Stakes back in 1988. Price at odds of 25/1, Steve Muldoon's two-year-old beat eleven rivals by two lengths. He is the joint longest odds winner in modern-day history. The other horse being the 2003 winner Red Power, trained by Paul Blockley.

A number of very classy horses have started their career over this flying five furlongs at Doncaster.

Let's take a look at 7 Brocklesby Stakes Winners You Will Never Forget:

1994 - Mind Games, trained by Jack Berry, who won by a neck at odds of 4/1. A talented colt who won at Group 2, but never could get his head in front for a Group 1 victory which he attempted 8 times. He finished a 20-race career by going to stud and although not the most successful stallion (fee £1,500 2010) he did sire Tangerine Trees. Mind Games was a horse very much associated with the man who wore the red shirt and a gifted sprinter.

Interesting Brocklesby Stakes Fact: Mind Games was odds-on (10/11) to win the Nunthorpe Stakes in 1995 when finishing behind So Factual in 6th place.

2002 - The Lord, trained by Bill Turner, who is a name synonymous with the Brocklesby Stakes. Sadly, in recent years, Turner has struggled to capture former glories that have seen him win this race six times. The Lord was a talented colt and worthy of note for a number of reasons. Firstly, he won the Brocklesby Stakes by an impressive five lengths in a seventeen-strong field at odds of 13/2. Racing in the familiar silks of Mrs. M S Teversham, this son of Averti went on to win the Lily Agnes Stakes at Chester. He disappointed in the Norfolk Stakes (Group 3) at Royal Ascot.

The Lord won at Listed class and achieved an official rating of 102. A durable horse, he raced 68 times winning just 8 races.

2009 - Hearts Of Fire, trained by Pat Eddery. This son of Firesbreak was a classy horse who must have been the apple of his trainer's eye. He won the Brocklesby in decisive fashion winning by two-and-a-quarter lengths at odds of 12/1, ridden by his brother, Paul Eddery. Hearts Of Fire ran creditably in the Brian Yeardley Continental Stakes when runner up at Beverley after a disappointing second start.

This colt looked pretty smart but there was a key factor to his future successes - he loved very testing ground. Racing at Listed class, he thrashed the opposition winning by over five lengths at Deauville, France. Next, a trip to Baden Baden, Germany, saw him trounce six opponents at Group 3.

Hearts Of Fire would next set hoof on the sodden ground at San Siro, Italy. Stepping up to 1m for the Gran Criterium (Group 1) he ran on well to win catching Godolphin's Vale Of York, the pair some five lengths clear of the third.

Thereafter, this exceptional colt would run at the highest grade and every inch a globe trotter concluding his career at Meydan.

2013 - Mick's Yer Man, trained by Bill Turner.  This son of Bahamian Bounty has a story which is something of a novelty. As stated, since 1988, Mick's Yer Man ran out the easiest winner of the Brocklesby Stakes by five lengths (shared with The Lord). This 5/1 winner was ridden by 7lb apprentice Ryan While [grandson of Bill Turner]. This March foal won in comprehensive fashion on his next start at Musselburgh.

Then the wheels fell off when returning after a long layoff which suggested Mick's Yer Man suffered an injury.

He wasn't seen to any effect until his four-year-old career when winning at Leicester. Later, a Listed win at Ascot. He was raced once more at three and not seen again for almost three years. In that time, Mick's Yer Man was gelded and sold privately by Turner and trained by T P Yung to race in Hong Kong. There were rich pickings to be had and this gelding proved to be an inspired purchase. He won three times in Hong Kong and pocketed substantial prize money.

Interesting Brocklesby Stakes Fact: Mick's Yer Man had a change of name to Always Win when racing in Hong Kong.

2016 - The Last Lion, trained by Mark Johnston. This son of Choisir certainly made an impact in his formative season - racing 10 times and then retired to stud. This bay colt made a sparkling start to his career when winning the 2016 Brocklesby Stakes by one-and-three-quarter lengths: ''Pushed clear and eased towards the finish''.

On his fourth start, he headed to Royal Ascot to compete in the Norfolk Stakes (Group 2). The 20/1 starting price didn't hold him back running a storming second place, headed in the final 150 yards to be beaten by half a length in a blanket finish.

Next race, Sandown's Dragon Stakes Listed race went to The Last Lion who powered clear of the field over five furlongs on soft going at odds of 10/11f.

This February foal would make his last five races at pattern class and ran the highest standard every step of the way.

A narrow loser when third in the Pepsi Max Flying Childers Stakes (Group 2).

The Last Lions' final race of the two-year-old season and his career saw him face nine rivals in the Juddmonte Middle Park Stakes (Group 1) at Newmarket over 6f on good-to-firm going. In a truly spectacular conclusion, the 25/1 shot made all under an expert ride from Joe Fanning, battling on gamely, always holding rivals to win by three-quarters of a length holding Charlie Appleby's Blue Point which started at fractional odds-on (10/11).

QUOTES: After the Brocklesby Franny (Norton) said THE LAST LION would be far better on faster ground. But if you look at his form behind Yalta at Goodwood (when second in the Molecomb Stakes on good), everybody thought his only chance would be when there is cut in the ground. Here he is, on fast ground, running the race of a lifetime on his tenth start of the year! It is another advert for going on and running them - Mark Johnston, trainer.

Interesting Brocklesby Stakes Fact: The only winner since 1988 to start at odds-on [4/5f].

2017 - Santry, trained by Declan Carroll. Sometimes the best horses have the least luck and that was the case for this bay colt a son of Harbour Watch. This February foal was fancied to go well when making his debut in the Brocklesby Stakes at Town Moor.

Backed to 4/1, he led one furlong out, idled in the last 75y but held on by a head from David Evans' Last Page.

There was a lot to like about Santry's second start when winning in style at Ascot under a penalty keeping on strongly when seriously backed from 4/1 - 9/4.

Next stop - Royal Ascot 2017. Declan Carroll's charge was made a 13/2 shot to win the Norfolk Stakes (Group 2). Santry was only denied by half a length from Aidan O'Brien's Sioux Nation who raced on the far side of the course. In fact, Santry had trouble in running and kept on well but couldn't peg back the Irish raider.

Sadly, this young colt's career was cut short when he broke a leg on the gallops. Carroll said: ''I can't believe we've lost him.''

Interesting Brocklesby Stakes Fact: Probably one of the most talented winners.

2019 - Show Me Show Me, trained by Richard Fahey. The Ontoawinner syndicate is no stranger to talented juveniles and this son of Showcasing was fancied to go well on debut in the Brocklesby Stakes and obliged with a purposeful victory winning by three-quarters of a length.

This horse ran seven times at two including a placed effort at Goodwood when third in the Markel Insurance Molecomb Stakes (Group 3) when losing a left front shoe.

Interesting Brocklesby Stakes Fact: The First winner for Ontoawinner syndicate but there will be more.

In many ways, the Brocklesby Stakes is far from a significant race but special because it is a celebration of the start of the two-year-old Flat turf season. It is the race trainers have hopes and dreams of winning in cold, winter months.

There have been a number of exceptional horses that have won the Brocklesby before going on the win at the highest level and conclude their success standing at stud. These seven horses have all started their career by tasting victory on debut. Very few horses achieve such a milestone. For some, it will be their first and last victory while other winners such as the 1996 Brocklesby Stakes winner Indian Spark (trainer by Bill Turner) ran an incredible 143 times.


The Brocklesby Stakes Q & A

Which is the best Brocklesby Stakes winner?

There is little doubt the seven horses mentioned are some if not the best. Personally, Mind Games, The Last Lion & Hearts Of Fire are exceptional talents.

What is the biggest priced winner of the Brocklesby Stakes?

Which horse won at the shortest odds?

That goes to The Last Lion (pictured), trained by Mark Johnston, who won at odds of 4/5f in 2016. He was the first horse to win the Brocklesby Stakes at odds-on.

Which horse ran the fastest time?

Hearts Of Fire won the 2009 Brocklesby Stakes in a time of 0:59.71 on good to firm going. In fact, he was the only horse to run under one minute since 1988 (this was due to fast ground conditions and a true talent).

In modern history, which horse trainer has won the Brocklesby Stakes the most times?

For me, the Brocklesby will always be a race to cherish and winners to hold dear.