Learning from Experience: Betting and Life 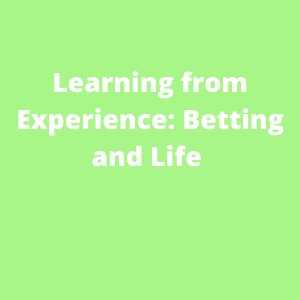 I used to play rugby union for my local team ''The Bears''. March Bears, a town named after the third month of the year. That isn't quite right because it was originally called Merch so I guess someone in the Fens couldn't read or write the Queen's English and the letter E turned into an A.

As if you look into your family history a surname often changes for no apparent reason.

Anyway, let's talk about the subject matter of Learning from Experience: Betting and Life.

Thank the Lord we learn a few things on our long or short journey of life. I guess some people are as stubborn as mules and either fail to learn or do so all too late. Sean Coronary, didn't listen to his ticker until it didn't go tick-tock.

I used to be quite a good rugby player and a leading try scorer for consecutive years.

However, I was stopped in my track when I tried to kick the rugby ball as did an opposing player (who was wearing shin pads) and my leg snapped. I'm not sure if you have ever heard a human or animal bone crack but it sounds like a piece of wood. The harder the impact the louder the noise. My tibia and fibula cracked in two causing a compound fracture to my right leg. The sound could be heard from one end of the field to the other. A sickening crack that seemed to echo in my ears.

I'm not sure if the spectators or my teammates heard it twice, but I hope not as the first time was enough to make people feel sick. It was a horrendous leg injury. Bones sticking out the back of my leg. I was still standing and this is the thought that ran through my mind 'How do you fall over with a broken leg?'' I did so as carefully as I could, falling on my backside, laying flat out for a second or two then looking at my lower leg to see the damage. It looked pretty gruesome; as if about six inches of the shin bone had been removed and the skin sunk down.

I can imagine you are reading this and wincing if not feeling sick.

I can't say I was feeling too good myself but strangely it wasn't too painful, a pins and needles kind of feeling no doubt due to nerve damage. The only time it hurt was when my leg was moved to put in a splint and it felt as if someone had stabbed a red-hot knife deep into my leg and dragged it about a bit for fun. I don't mind admitting I gritted my teeth at that moment and said to myself: ''Keep calm and be strong.''

I did exactly that.

I was in shock. The incident played through my mind as if on a loop. I could hear the sound and impact playing in my mind and it felt as real as the original. I'm sure this is what happens to a stressed mind as it tries to make sense of what is happening. People say when you are drowning your life flashes before your eyes. I'm pretty sure they mean if you are involved in a serious impact and injury you revisit it a few times before the dust settles.

You may be thinking what did I learn and how does it relate to gambling. Firstly, I realised trying to kick a rugby ball wasn't the best idea when it was bouncing all over the place.

I learned that I was strong, tough enough to cope and that if I grit my teeth and battle on it would be ok.

This doesn't make me any different to 99% of the population who would do exactly the same.

The thought of breaking your leg so it looks quite mangled isn't what you would wish for.

However, you would cope even if you don't relish the thought.

Someone asked me if I wish it hadn't happened. Logically, you say yes. It seems a little bizarre to say I was pleased to have been involved in this injury that took one second to happen and almost two years to recover. I was walking on crutches for a year after a two-hour operation to put a titanium rod down my tibia (shin bone) via removing the kneecap and two screws holding it in place at the top of the tibia and two at the bottom a few inches about my ankle. After eighteen months I had to have the bar and screws removed. In all, my leg didn't feel right for about two years.

In many ways, I'm pleased to have had the experience however disturbing at the time. I am a wiser person for it and learned something about myself and importantly about others.

A number of my teammates rallied round and looked after me as I lay flat out on the turf thinking about the situation. All good people. They were most certainly there for me in my time of need. One of the spectators, who played regularly for the team, and a paramedic didn't help because he said he was off duty. I'm not sure if there was a legal reason for not helping me but he didn't. I don't hold it again the person but I don't forget either. Like it or not I don't think it was a particularly caring attitude. Perhaps they had a perfectly understandable reason and I will take that as being the case. I can't say I was impressed and I never looked upon the person the same thereafter.

In ways, gambling is the same. It is all about living and learning. And we can be wiser for both wins and losses. It may be a big loss or a small loss. It may be a big win or a small win. But each happening is a moment to learn. It may be the case something minor triggers an understanding that will save or make us a lot of money in the future or a wise decision for ourselves or others.

So even a bad day can turn good if we learn a thing or two.