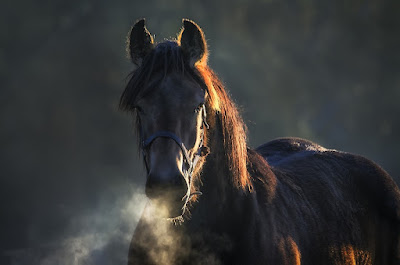 I remember watching Racing UK, as it was known in the day and James Willoughby said there was literally no logic following a trainer in form.

Now, I know James is an intellectual and he certainly knows a lot more about statistics than I do  (although I do have an understanding from my research within psychology, which is enough to bamboozle the life out of me). I enjoy his analysis although I do feel his rambles can go on a little too much at times and listeners lose the thread of the subject matter. That's talking about horse racing let alone statistics, which to most people in the human race equates to watching paint dry. I was going to say listening to paint dry but not sure if that makes much sense, but you get the idea.

He is very much in the mould of John Berry who is another racing pundit (and talented horse trainer) but someone so stop-start in his dialectical materialism that I am kind of fascinated and losing the will to live at the same time. Please, if you are fans of either or both, these words are not meant as a criticism as I admire both and they have a lot more to offer than the generic racing pundit who would be at a loss without the classic cliches (which well and truly have me pressing the mute button).

I do enjoy an original thought or piece of information (even a word) which tells me this person knows their stuff. That is a rarity if not difficult when talking in soundbites for a media that isn't really interested in going above and beyond the norm for the happy medium (which is a fair stat in itself).

But here's the question: Do You Follow a Trainer in Form?

Richard Fahey started this two-year-old season out of form. It's a surprise as he is normally a handler who literally hits the turf running. Fahey said after a number of two-year-old disappointments that his early string was simply not as good as they had hoped. Which must be a bitter pill for any trainer to swallow. These things have to be taken in the context of a whole season because Mews House, Musley Bank, Malton won't lack in classy two-year-old because based on a numbers game they must have 100+ in their ranks.

However, the fact the stable has struggled to win with their two-year-olds this season does make me keep my money in my pocket until they start to find the winner's enclosure.

Similarly, Brian Meehan has started this season with a bang and a purple patch with just five two-year-olds running so far and four winners, three on debut, two at double-figure odds.

Throughout the season we will see a number of peaks and troughs with trainers and they will (hopefully) come out the other side with a few, if not, many winners. Sadly, a few well-known horse trainers struggle when the winners dry up, being funded by a few rich owners who rightfully want to see success.

I remember Olly Steven was one such trainer who made it public that he had a couple of years to prove his worth or his hopes and dreams would fall by the way. He started his career with a number of two-year-old talents and things looked prosperous but the second season didn't see such rich pickings and he fell by the way.

Just think of the number of talented horse trainers who have come and gone. In this economic climate, I am sure many others will be fearing what the future holds.

I felt sad for Mark Brisbourne who had a small string but a very talented trainer and very much a family concern. However, after a 30-year career and sending out 560 winners his business was literally culled when the Earl of Bradford sold the land to build five homes and he was left with no option but relinquish his trainer's licence.

His fateful words: ''I'm being forced to quit.''

Racing is all about the horse's finishing position but also the story behind trainers big and small.

Sometimes those very statistics hide a bucket full of tears.