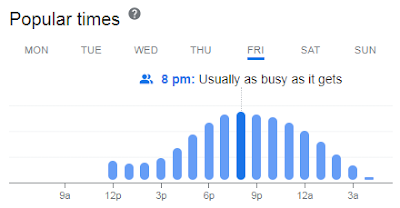 Don't you love a chart?

They make a fun way to understand something: facts, figures any number of things.

I particularly like a pie chart as it reminds me of how many apple pies can be safely consumed in a year without the onset of diabetes.

This chart shows the popular times at the Grosvenor Casino Great Yarmouth on a Friday night.

Now, I don't know if you have ever frequented this place which sits on the coast of Norfolk but, if not, you're missing out. To be fair, many a gambler may not be too much bothered about the location or the building as long as it has plenty of slots, roulette tables, poker, blackjack and all the familiar games you would expect of any discerning casino.

You may be thinking: ''What's so interesting about the Grosvenor at Great Yarmouth?

It's a lovely listed building with a touch of glamour and glitz. Remember, all this sparkle doesn't cost you a penny more. It just adds to the occasion and makes a gamble, in my opinion, all the more interesting. There's something about a brick-and-mortar casino on the coast. Perhaps it's those high ceilings and bar that looks something out of a Ian Fleming book. If you aren't up to scratch on your authors, that's the man who wrote all the James Bond novels (yes, they were written as books before being made into films!). Who doesn't like a touch of the Casino Royales?

This was his first book about James Bond published in 1953.

You won't find baccarat played in Norfolk country. Well, not as far as I know at the casino in Great Yarmouth. Although if you are looking for the royal link, Edward VII, future king of England, stayed at Shadingfield Lodge in the 1870s when it was a private house in the ownership of James Cuddon, a barrister of Middle Temple. It was opened as a pub and hotel in 1953 and later the Grosvenor Casino.

I've been to the Grosvenor Casino at Great Yarmouth at least 15 times over the years. And it's always an enjoyable night out whether win, lose or draw. Thankfully I have never lost my shirt.

Looking at the chart for the most popular times on a Friday night, we can see that around 8 pm is the busiest. It's about the time myself and family turn up. I'm usually ready to go home about 12 although I have stayed until 1 am or so a few times.

Have you ever watched the episode of Only Fools And Horses when Del Boy leaves the casino (I think it is the One-Eleven Club). Pretty sure the episode was titled: Fatal Extraction. Del Boy is having marriage problems and makes a date with a dental assistant when struggling with a bad tooth and thinks the lady is an escapee from the psychiatric hospital. He'd got his wires crossed.

Anyway, one of the scenes showed Del Boy leaving the casino unaware that it was the next morning.

Surprised to see it was daylight.

This actually happened to my cousin when having a very long night at the Grosvenor Casino at Great Yarmouth.

He was basically told to go home at 6 am when it closed for a couple of hours. There was us having breakfast at the Embassy Hotel, just a stone's throw from the casino, at Camperdown. I was tucking into my full English breakfast when a worse-for-ware sight appeared opposite me and small breakfast was eaten by the said cousin as he felt a bit queasy after a barrel-load of drink.

I didn't ask if he had won or lost. However, I concluded the only reason someone would be gambling at 5 am was because they were winning and the next hour could be good or bad news. The alternative is that it was a terrible night from start to finish and they were chasing their losses.

I thought it was best not to ask.

As we can see by the graph, it looks like a handful of lost souls and staff are hanging about the casino at 4 am.

I would hate to know the story of those who were literally kicked out at 6 am.

If you want the place to yourself, to see what gambling looks like at the rock face, I suggest you turn up, sober, at 5:10 am, don't gamble, but sit at the bar and watch the scene before you.

You'll be a wiser gambler for the experience.